Close Menu
The Lawyer You Choose To Hire Really Matters click here How much is my case worth?
Columbia Personal Injury Attorney > Blog > General > Motorcycle Lane Splitting in South Carolina 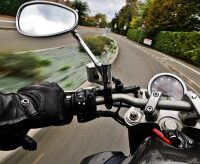 What Is Lane Splitting?

Why Is Lane Splitting Dangerous?

Lane splitting is dangerous for a number of reasons. The biggest risk to motorcyclists is the risk of not being seen by drivers of passenger cars who are not expecting a motorcycle to pass their vehicle. Because a motorist may not be looking for motorcyclists in between lanes, they may attempt to change lanes or perform another maneuver without first seeing the motorcyclist, increasing the risk of an accident.

Lane splitting may also upset motorists, leading to incidents of road rage and driver aggression, which can be very dangerous for all parties involved. The risk of an accident occurring when lane splitting is involved also increases if the motorcyclist is traveling significantly faster than the surrounding traffic.

Is Lane Splitting Legal or Illegal in South Carolina?

Lane splitting is against the law in South Carolina (California is currently the only state that allows lane splitting). The section of code prohibiting lane splitting in our state is found in Section 56-5-3640(d), which reads that motorcycles may not be operated more than two abreast in a single lane. If you are caught lane splitting, you may receive a traffic citation.

How Will Lane Splitting Affect Your Injury Case?

More concerning than merely getting a traffic citation for lane splitting is being involved in an accident that results, in full or in part, from lane splitting. Even if the other driver was mostly to blame for the crash, if you are found to have contributed to the accident, your recoverable damages will be reduced in proportion to your degree of fault (per our state’s modified comparative negligence rule).

The modified comparative negligence rule in South Carolina claims that if you are found to be more than 50 percent to blame for an accident, you cannot bring forth a claim against the other driver. Instead, you would need to pursue damages against your own insurance company (if you have certain coverage types).

On the other hand, if you were found to be less than 50 percent to blame for the accident, then you can still recover by pursuing damages against the other driver. However, your recoverable damages award will be reduced in proportion to your degree of fault. So, if you are found to be 40 percent at fault and you suffer $100,000 in damages, you can only hold the other party liable for 60 percent of your losses, or $60,000.

If you are lane splitting and are involved in an accident while you are performing this maneuver, it will be very hard to make an argument that you didn’t contribute to the accident, as lane splitting is unsafe and against the law, making it an act of negligence per se.

How a Lane Splitting Accident Lawyer Can Help You

If you are involved in a lane-splitting accident and you suffer damages, you should make hiring an attorney a priority. This is because it is very likely that as soon as you submit your claim and the insurance company sees the police report detailing that you were lane splitting, your claim will be denied. If you want to fight back against this claim denial—which you absolutely should do—you’ll want a skilled attorney on your side.

Your attorney can help you by:

At the law office of the Marcus Brown Law Firm, our lawyers have experience working on lane-splitting accident cases. We know how difficult it can be to hear from an insurance adjuster that your claim has been denied, especially if you are severely injured. We will work hard to build your case and get you the compensation award that you deserve, and we always work on a contingency fee basis.

You Deserve Compensation After a Motorcycle Crash

Although motorcycle lane splitting in South Carolina is illegal, if you were harmed while performing this maneuver, this does not mean that you don’t deserve any compensation for the damages you have suffered. To schedule your free consultation with our South Carolina motorcycle accident lawyers, please call us directly or send us a message requesting more information. Our team at the Marc Brown Law Firm is here to serve you.

By Marc Brown Law Firm | Posted on March 3, 2020
« How to Win a Truck Accident Lawsuit in South Carolina
Common Back Injuries in Car Accidents »